Rummage through this blog

Review: The Undead Day Twenty One

The Undead Day Twenty One by R.R. Haywood
My rating: 4 of 5 stars

I have a Fluval Spec 10L, it's a good looking, small tank. Small enough to fit pretty much anywhere and also small enough to relocate if need be. 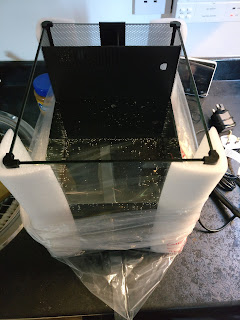 Planted up in January 2020 taking plants and filter media from my old 60l tank which had become tatty and had a couple of years of neglect. Old a single resident remained, we purchased some shrimps around 10 years ago and we had a single amano shrimp still alive.
A search on google will tell you they live two to thre years and cannot breed in a tropical tank. We this guy is still going nicely, to be fair a month or so previously he had a tank mate, a second remaining amano shrimp but just the one left.
Anyway, the plants were some crypts and the worldest smallest java fern, I remember pruning java fern in a 100l cold tank but this I didn't know we had it was so small, it was lost on the back of a piece of mopani which was also being moved. I changed my mind on the mopani and rummaged in the fish tank spares in the garage for a better fit and inspite of being out of the tank, in a carrier bag and at the back of the garage there were some strands of java moss clinging to life. Doing well especially as I have never added java moss to the tank so no idea where that came from.
Anyway, 5 months on and the plants are growing well. I've added several other plants :
Somewhere along the line something came with duckweed, the fish were eatting that so the last couple of pieces, some java moss and a couple of other odds and ends have gone into a cold water tank (well, an old Dowe Egberts coffee jar), all growing nicely and the java moss is reaching out of the top of the water and the marsilea seems to like cold water better than tropical. 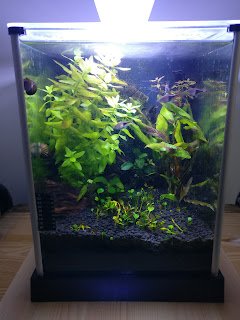 In terms of animal life I started with 6 harlequin raspboras but 2 jumped ship, literally jumped out and were found mummified on the floor later. I had also successfully transferred the amano shrimp. Typically I had acquired a lot of small snails, they bothered me but not any more, they are harmless and the odd one crushed on the side is good for the fish. I purchased two nerite snails, one arrived and didn't look particulary young and sure enough within a couple of weeks he had given up the ghost but the other is still chomping his way around the algae doing a great job of keeping the glass clean. Finally, I added 10 low grade red cherry shrimp. That's not going so well, there are four left that I can spot, they certainly haven't all died at once and I have tested the water quality & check the temperature. That said I am like so many other people and probably added them a little early.
So back to the tank.
It is a good looking tank with a large filter area compared to the tank size. I have seen lots of articles about people replacing the default inserts with a third party package that costs almost as much as the tank and I am not sure why - I brought across my old media (some akin to fluval biomax, no idea what variety it started life as) and put that into the cavities on the sponge, then under the sponge I have a couple of layers of filter "wool" stuff and then under than the biomax media that came with the tank. I have got the packet of carbon still and that is balanced at the top of the pump cavity. The water is clear and the filtering appears to work well, I would have rathered the top intake had longer slots to cope with lower water levels more effectively but then they did put a lower slot in but as everyone else points out that is in the wrong place so will be a danger to small critters. The force harlequins I have are growing larger than expected but I suspect the bioload on the tank is sensible but my plan is to tinker with the pump to see if I can mount it higher and thus provide more filter area.
Anyway....because this tank has a relatively high surface area to the total volume it is noticeable how quickly the water evaporate.  I would say 1 to 1.5cm a week. It is remarkable, fill to the brim and a few days later I am thinking about refilling.
But last week I noticed something, that the pine base I had made has warped, and indeed when I touched the black plastic surround there was wet all around the bottom and pushing it squeezed water out.
The tank is leaking. Oh dear. I understand there is a two year warranty so my only concerns is transferring all the lovelly growth to a new tank.
Raised a ticket on the fluval site. Four days for a response and the response was "why are you contacting us, it's the retailer's problem". Nothing useful what so ever, not even an attempt to say "are you sure".
Well a week on and it is all dry, so no leak but for that period the water has been below the black decorative corners and after a bit of investigation it seems that when the water level is taken above the black corners they wick the water out and then down the silver sides.
Today I have applied some silicone (yes proper aquarium silicone) to the inside of those pieces to, I hope, stop the wicking. I have also put a dob of silicone on the end of the siting posts on the lid in case that too is an issue.
One last design flaw with the tank, the filter compartments have a divider but that divider is very low and as a result water is sucked from the filter side to the pump side without going through the filter. I added a piece of foil to reduce the flow but as I was out with the silicone I have built that up to the same level as the rest of the baffles. 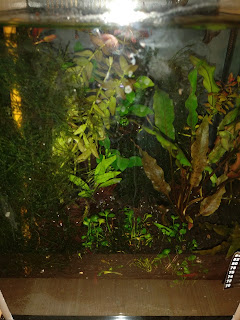 I really like this tank. I think the 15l model would allow much more flexibility with a central point of focus rather than traditional front to back but I'm happy.
No comments:

The Undead Day Twenty by R.R. Haywood
My rating: 0 of 5 stars

The Undead Day Nineteen by R.R. Haywood
My rating: 4 of 5 stars

The Undead Day Eighteen by R.R. Haywood
My rating: 4 of 5 stars